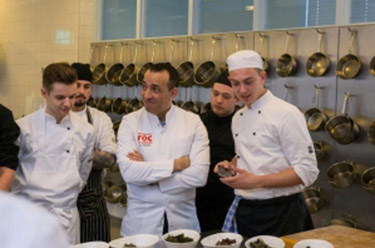 On the 18th of March, city counsler Choho of Amsterdam launched the project ‘New Proteins on the Menu’. For two months, five food service locations in Amsterdam are serving proteins that are more sustainable and animal friendly than traditional proteins. The project is part of the Green Deal for More Sustainable Food Consumption by Dutch Cuisine, an alliance of 15 national and local governments, companies and civil society organizations.

Dutch Cuisine searched for new proteins that could replace our traditional, often unsustainably produced proteins. By making a wide audience aware of the culinary possibilities of sustainable proteins, they can stimulate demand and the production of these proteins in the Netherlands. The five selected protein sources are buckwheat, seaweed, Dutch beans, North American crayfish and the Dutch “laying cock”. The five sustainably produced protein sources have been introduced as the Fab Five.

The Fab Five are all protein sources that score well on sustainability, animal welfare and health. Beans, seaweed and buckwheat contain many good vegetable proteins and are cultivated sustainably. The North American crayfish is a harmful exotic species in Dutch waterways and its consumption can prevent its further spread. The choice for the laying cock has an extra added benefit. Every day, 100,000 newly born male chicks are killed because they are not needed by the egg industry. These cockerels now have a good life and are fed with local grains. These antibiotic-free young chickens are also quite tasty.

The participating venues are the restaurant Bolenius, the Deloitte building, the Cordaan Care Centre, the restaurant Elements and the City of Amsterdam’s cafeterias. Visitors receive extensive information about the origin of the ingredients and their sustainable background. Dutch Cuisine’s goal is that consumers become more aware of the source of their protein. To measure the results, guests are asked their opinions of the dishes. This information helps to upscale the consumption of the five sustainable proteins and to make them more widely available.

The Amsterdam city counsler Choho (Sustainability) gives the official go-ahead for ROC Amsterdam to start cooking with its students. He is pleased with the initiative: “In Amsterdam there is a lot going on with food, from urban agriculture to new proteins on the menu. As a City, we don’t prescribe what needs to be done, instead we stimulate renewal in the area of food. For the Green Agenda, I have allocated half a million to support food initiatives. It’s nice to see that here a generation of cooks at ROC Amsterdam is getting started with new proteins on the menu.”

The pilot is being supported by the Dutch Ministry of Infrastructure and the Environment, the City of Amsterdam, Natuur & Milieu, Albron, Sligro, CREM and Mattmo. CREM, a consultancy for sustainable development, is responsible for the sustainability analysis of the five protein sources and the implementation of the pilot.