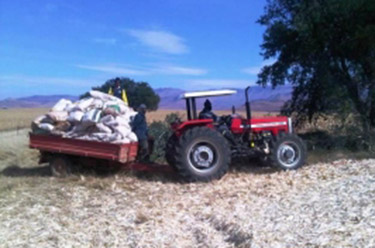 The project Moving South Africa forward to certified sustainable energy was started out in 2009. The project was managed by the National Development Agency and Tsebo Consulting in South Africa and supported in particular by Gwynne Foster (South Africa), Brinkmann Consultancy (the Netherlands) and CREM.

During the project, small producers were supported in the production of certified biomass and the creation of local employment options. The crops, soy and sunflowers, were cultivated on degraded land. Maize was cultivated in addition to the biomass in order to increase food production in the region.

Results of the pilot projects

Two pilot projects were successfully completed in the Eastern Cape. In these projects, producers were prepared for certification according to the requirements of the Roundtable on Sustainable Biomaterials (RSB). During the project, it appeared that the actual certification of the producers involved more time than expected. Producers needed schooling  to learn about keeping track of agricultural data, applying Good Agricultural Practiceand the creation of good working conditions.

During the project, handbook was developed containing instructions and room for producers to keep track of their own agricultural data (such as planning cultivation, seeding, harvesting and subjects including erosion prevention, resource use and yield data). The handbook gave the producers insight into their agricultural practices, which helped to improve their performance.

It is expected that producers will be RSB certified within a year and a half or two years. RSB is now developing a specific standard for small producers so they can more easily fulfil the high requirements of certification. The South African project has been selected is one of the pilot projects giving input for this standard.